The game should take you 5-10 minutes to fully experience. It is entirely based in text.

Wide Island is an experimental story. It lets you decide how much of the detail you want to uncover before you proceed to the end. It leaves you to piece together the personality and identity of the character you are playing, filling in the gaps that need to be filled to truly understand another person.

It is a human story about events far larger than we can imagine. In this text-based adventure, you will click through the details of the life of one man, before connecting him to a larger world.

Very interesting. I think this kind of interactivity is something that should be explored in traditional stories so it's really great to see someone finally give it a go (personally I struggle to follow characters and such, so being over to hover over people to remember who they are would be nice in longer books).

I think the "story" works well with this kind of mechanic as well, going back and finding out about the other people there after knowing what happens has a strong impact.

Perhaps if after going back there was more story to unfold, but it felt far too ramble-y after a while which isn't a great note to end on. More like padding than anything.

It does raise a lot of interesting ideas though. Like, what if you go back and reading in more detail re-contextualizes the events.

But my biggest complaint was that you basically had the opportunity to do so. Instead, we get the ending ramble telling us what the stories about. No story should have to end by telling the reader "this is what the stories about, this is what it's meant to make you feel", that's the stories job. Going back and reading everything else might have had a lot more impact had the end screen not literally gone "this is what the story is about", isn't the entire point of this that I can go back and discover that for myself, instead all of it was spoiled. At least give the option to play again before proceeding to developer commentary.

To end on a more positive note, I'm glad this sort of thing exists. There's so much more opportunity for discussion in a story that people experience at different paces and where they know different information.

Thank you for giving it a shot!

I think I understand what you're saying. From a certain perspective, it's less of a story and more of a strange, world-exploration, read-to-find-out-more piece of fiction. I can see what you mean when you say the ending ramble is doing the story's job. It would absolutely be so much cooler if you could discover it through the story itself, recontextualising as you go. Definitely something I will be experimenting with on the next one.

I'm really happy that the format and system were interesting to you. Maybe a longer-form story in the same system would work better and I'm definitely gonna try something along those lines out in the future. Thank you for taking the time to provide such detailed feedback! 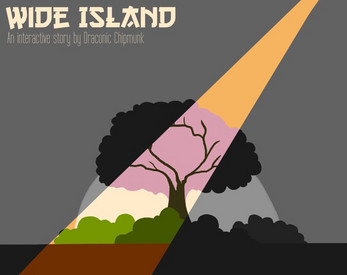